Dark Wave, also written as darkwave, is a music genre that began in the late 1970s, coinciding with the popularity of New Wave and post-punk.

Building on those basic principles,dark wave added dark, introspective lyrics and an undertone of sorrow for some bands.

In the 1980s, a subculture developed alongside dark wave music, whose members were called &quot;wavers&quot; or &quot;dark wavers&quot;.

The British post-punk groups that inspired Gothic rock provided initial impetus for the movement. As a result, dark wave is linked to the Goth subculture. 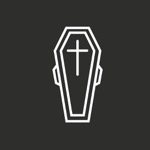